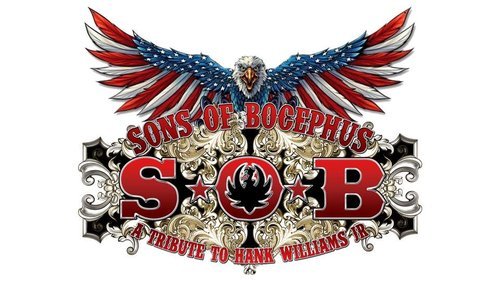 “Growing up in the South, there are a few things you are born and raised to love! Football, the great outdoors, and Hank Williams Jr!

We were raised on the southern rocking country sounds of Family Tradition, Country Boy Can Survive, Born to Boogie, My Name is Bocephus, and all the other great songs we play tribute to night in and night out.

What originally was tossed around as an idea to do a tribute to Southern Rock quickly became the idea of being a tribute to the one and only Bocephus himself! Lead singer, Wil Riggs, was raised on Hank Jr, and his dad was such a fan of Bocephus, that he called Wil Bocephus his whole life. Lead Guitarist, Ignatius Applewhite, drove around all through high school with Hank Jr’s Greatest Hits in the cassette player.3 Years Later, and the SOBs are rocking venues across the country and are 2021 Josie Music Award Nominees for Tribute Band of the Year!If you are ready for a Southern Rockin’, Honky Tonkin’ Good time, the Sons of Bocephus are who you want to see!”

$7 Cover at the door

Thursday-Saturday 10pm to 2am